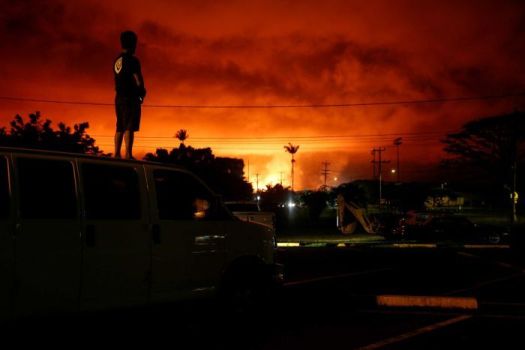 The latest estimate of property losses from Kilauea, one of the world’s most active volcanoes, far surpasses the 215 structures consumed by lava during more than 30 years of an earlier eruption cycle that began in 1983.

County civil defence officials had a day earlier put the confirmed number of homes destroyed during the past month at 130, all of them in and around the Leilani Estates community, where lava-spouting fissures opened up on the volcano’s eastern flank on May 3.

More recently, a huge river of lava that has crept several miles across the landscape to the eastern tip of the island engulfed two entire seaside housing subdivisions, burying hundreds more homes there, while vaporising a small freshwater lake.

An estimated 2,500 people have been displaced by evacuations across the island and geologists say they have no idea how much longer the eruption will continue.

Hawaii Governor David Ige has signed a memorandum of understanding furnishing millions of dollars in state disaster relief to the island.

Lava from the Kilauea volcano that flowed into Kapoho Bay has created approximately 1.5km of new land. 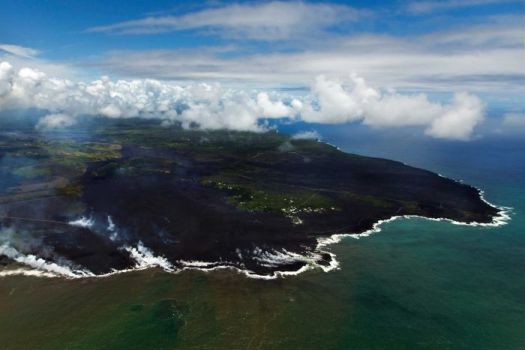 But the land is still highly unpredictable, and once the lava cools and hardens it will leave behind a jagged, scorched landscape with razor-sharp shards of volcanic rock.

It won’t look like the farmland that dominates that region of the Big Island anytime soon.

Depending on climate, rainfall and other variables, new vegetation could start growing soon, but it would take much longer for the fertile land and lush rainforests to build back up.

For example, one small ohia tree was observed by a National Park Service employee last week during a tour of a two-year-old inactive flow.

While the new land is owned by the state, people that have private property in the affected areas will still own their land, although it will need to be reassessed once the lava stops flowing.