In two studies, international teams of astronomers suggest that recent images from NASA’s Chandra X-ray Observatory of two pulsars – Geminga and B0355+54 – may help shine a light on the distinctive emission signatures of pulsars, as well as their often perplexing geometry. 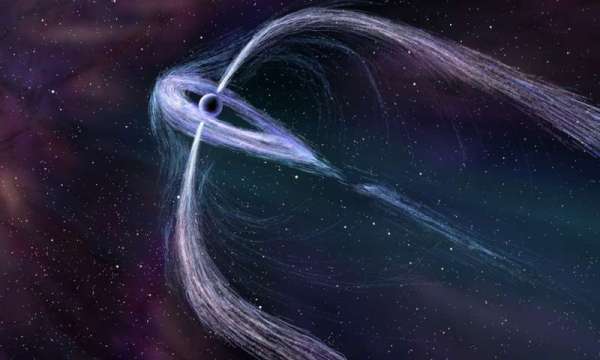 Interestingly, the beams rarely match up, said Bettina Posselt, senior research associate in astronomy and astrophysics, Penn State. The shapes of observed radio and gamma-ray pulses are often quite different and some of the objects show only one type of pulse or the other. These differences have generated debate about the pulsar model.

“It’s not fully understood why there are variations between different pulsars,” said Posselt. “One of the main ideas here is that pulse differences have a lot to do with geometry – and it also depends on how the pulsar’s spin and magnetic axes are oriented with respect to line of sight whether you see certain pulsars or not, as well as how you see them.”

Chandra’s images are giving the astronomers a closer than ever look at the distinctive geometry of the charged particle winds radiating in X-ray and other wavelengths from the objects, according to Posselt. Pulsars rhythmically rotate as they rocket through space at speeds reaching hundreds of kilometers a second. Pulsar wind nebulae (PWN) are produced when the energetic particles streaming from pulsars shoot along the stars’ magnetic fields, form tori – donut-shaped rings – around the pulsar’s equatorial plane, and jet along the spin axis, often sweeping back into long tails as the pulsars’ quickly cut through the interstellar medium.

“This is one of the nicest results of our larger study of pulsar wind nebulae,” said Roger W. Romani, professor of physics at Stanford University and principal investigator of the Chandra PWN project. “By making the 3-D structure of these winds visible, we have shown how one can trace back to the plasma injected by the pulsar at the center. Chandra’s fantastic X-ray acuity was essential for this study, so we are happy that it was possible to get the deep exposures that made these faint structures visible.”

A spectacular PWN is seen around the Geminga pulsar. Geminga – one of the closest pulsars at only 800 light years away from Earth – has three unusual tails, said Posselt. The streams of particles spewing out of the alleged poles of Geminga – or lateral tails – stretch out for more than half a light year, longer than 1,000 times the distance between the Sun and Pluto. Another shorter tail also emanates from the pulsar.

The astronomers said that a much different PWN picture is seen in the X-ray image of another pulsar called B0355+54, which is about 3,300 light years away from Earth. The tail of this pulsar has a cap of emission, followed by a narrow double tail that extends almost five light years away from the star.

While Geminga shows pulses in the gamma ray spectrum, but is radio quiet, B0355+54 is one of the brightest radio pulsars, but fails to show gamma rays.

“The tails seem to tell us why that is,” said Posselt, adding that the pulsars’ spin axis and magnetic axis orientations influence what emissions are seen on Earth.

According to Posselt, Geminga may have magnetic poles quite close to the top and bottom of the object, and nearly aligned spin poles, much like Earth. One of the magnetic poles of B0355+54 could directly face the Earth. Because the radio emission occurs near the site of the magnetic poles, the radio waves may point along the direction of the jets, she said. Gamma-ray emission, on the other hand, is produced at higher altitudes in a larger region, allowing the respective pulses to sweep larger areas of the sky.

“For Geminga, we view the bright gamma ray pulses and the edge of the pulsar wind nebula torus, but the radio beams near the jets point off to the sides and remain unseen,” Posselt said.

The strongly bent lateral tails offer the astronomers clues to the geometry of the pulsar, which could be compared to either jet contrails soaring into space, or to a bow shock similar to the shockwave created by a bullet as it is shot through the air.

Oleg Kargaltsev, assistant professor of physics, George Washington University, who worked on the study on B0355+54, said that the orientation of B0355+54 plays a role in how astronomers see the pulsar, as well. The study is available online in arXiv.

“For B0355+54, a jet points nearly at us so we detect the bright radio pulses while most of the gamma-ray emission is directed in the plane of the sky and misses the Earth,” said Kargaltsev. “This implies that the pulsar’s spin axis direction is close to our line-of-sight direction and that the pulsar is moving nearly perpendicularly to its spin axis.”

Noel Klingler, a graduate research assistant in physics, George Washington University, and lead author of the B0355+54 paper, added that the angles between the three vectors – the spin axis, the line-of-sight, and the velocity – are different for different pulsars, thus affecting the appearances of their nebulae.

“In particular, it may be tricky to detect a PWN from a pulsar moving close to the line-of-sight and having a small angle between the spin axis and our line-of-sight,” said Klingler.

In the bow-shock interpretation of the Geminga X-ray data, Geminga’s two long tails and their unusual spectrum may suggest that the particles are accelerated to nearly the speed of light through a process called Fermi acceleration. The Fermi acceleration takes place at the intersection of a pulsar wind and the interstellar material, according to the researchers, who report their findings on Geminga in the current issue of Astrophysical Journal.

Although different interpretations remain on the table for Geminga’s geometry, Posselt said that Chandra’s images of the pulsar are helping astrophysicists use pulsars as particle physics laboratories. Studying the objects gives astrophysicists a chance to investigate particle physics in conditions that would be impossible to replicate in a particle accelerator on earth.

“In both scenarios, Geminga provides exciting new constraints on the acceleration physics in pulsar wind nebulae and their interaction with the surrounding interstellar matter,” she said.