APEX, the Atacama Pathfinder EXperiment telescope, is located at 5100 metres above sea level on the Chajnantor Plateau in Chile’s Atacama region. The ATLASGAL survey took advantage of the unique characteristics of the telescope to provide a detailed view of the distribution of cold dense gas along the plane of the Milky Way galaxy. The new image includes most of the regions of star formation in the southern Milky Way. 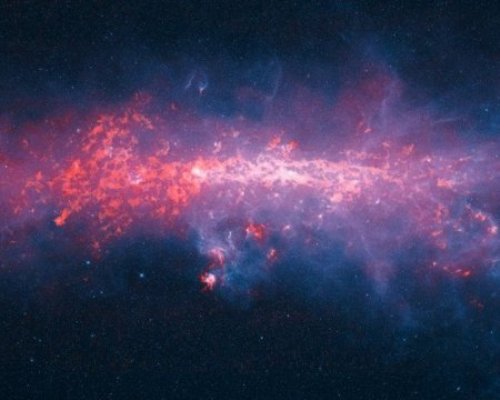 The new ATLASGAL maps cover an area of sky 140 degrees long and 3 degrees wide, more than four times larger than the first ATLASGAL release [3]. The new maps are also of higher quality, as some areas were re-observed to obtain a more uniform data quality over the whole survey area.

The ATLASGAL survey is the single most successful APEX large programme with nearly 70 associated science papers already published, and its legacy will expand much further with all the reduced data products now available to the full astronomical community .

At the heart of APEX are its sensitive instruments. One of these, LABOCA (the LArge BOlometer Camera) was used for the ATLASGAL survey. LABOCA measures incoming radiation by registering the tiny rise in temperature it causes on its detectors and can detect emission from the cold dark dust bands obscuring the stellar light.

The new release of ATLASGAL complements observations from ESA’s Planck satellite. The combination of the Planck and APEX data allowed astronomers to detect emission spread over a larger area of sky and to estimate from it the fraction of dense gas in the inner Galaxy. The ATLASGAL data were also used to create a complete census of cold and massive clouds where new generations of stars are forming.

“ATLASGAL provides exciting insights into where the next generationof high-mass stars and clusters form. By combining these with observations from Planck, we can now obtain a link to the large-scale structures of giant molecular clouds,” remarks Timea Csengeri from the Max Planck Institute for Radio Astronomy (MPIfR), Bonn, Germany, who led the work of combining the APEX and Planck data.

The APEX telescope recently celebrated ten years of successful research on the cold Universe. It plays an important role not only as pathfinder, but also as a complementary facility to ALMA, the Atacama Large Millimeter/submillimeter Array, which is also located on the Chajnantor Plateau. APEX is based on a prototype antenna constructed for the ALMA project, and it has found many targets that ALMA can study in great detail.

Leonardo Testi from ESO, who is a member of the ATLASGAL team and the European Project Scientist for the ALMA project, concludes: “ATLASGAL has allowed us to have a new and transformational look at the dense interstellar medium of our own galaxy, the Milky Way. The new release of the full survey opens up the possibility to mine this marvellous dataset for new discoveries. Many teams of scientists are already using the ATLASGAL data to plan for detailed ALMA follow-up