A volcano beneath Bermuda formed in a way that has never been seen before, scientists have discovered. The volcano appears to have been created by material rising up from a region deep beneath Earth’s surface—the transition zone. 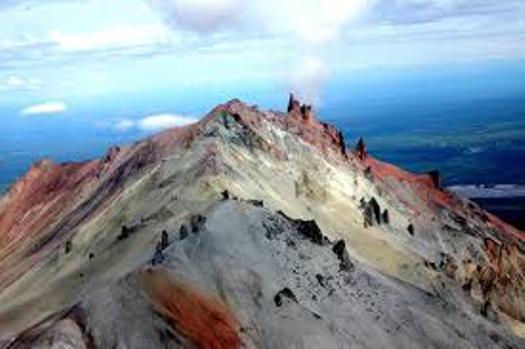 The transition zone is the region between the upper and lower mantle. It extends between 250 and 400 miles beneath the surface of the planet and is rich in water, crystals and melted rock.

Volcanoes normally form when the tectonic plates are pushed together or pulled apart, producing a crack in Earth’s surface where magma can escape. They can also form at “hotspots,” where mantle plumes rise up and melt a hole in the plate—Hawaii is an example of this.

Now, researchers have found volcanoes can also form when material moves up from the transition zone. The team believes there was a disturbance in the transition zone that forced the material in this layer to melt and move up towards the surface. Their findings are published in the journal Nature.

The researchers were analyzing a now dormant volcano beneath the Atlantic Ocean that was responsible for the formation of Bermuda. They were looking at the chemical composition of a 2,600-foot core sample—by understanding its makeup they could build a picture of Bermuda’s volcanic history.

“Before our work, Bermuda has been interpreted as the result of a deep thermal anomaly in the Earth’s mantle, but there was no direct data to support this. This is due to the fact that the volcanic edifice is completely covered by limestone,” Cornell’s Esteban Gazel, one of the study authors, told Newsweek.

In a statement, he said they were expecting to show that the volcano was a mantle plume formation like Hawaii. This was not what they found, however. The measurements taken from the core sample were unlike anything seen before, suggesting the lava came from a previously unidentified source.

The samples contained signatures from the transition zone. Compared to samples taken from subduction zones, there was more water trapped in the crystals. The transition zone is known to contain vast quantities of water—one study calculated there is three times as much water in this region of Earth than is present in all the world’s oceans.

“I first suspected that Bermuda’s volcanic past was special as I sampled the core and noticed the diverse textures and mineralogy preserved in the different lava flows,” lead author Sarah Mazza, from the University of Münster, Germany, said in the statement. “We quickly confirmed extreme enrichments in trace element compositions. It was exciting going over our first results … the mysteries of Bermuda started to unfold.” 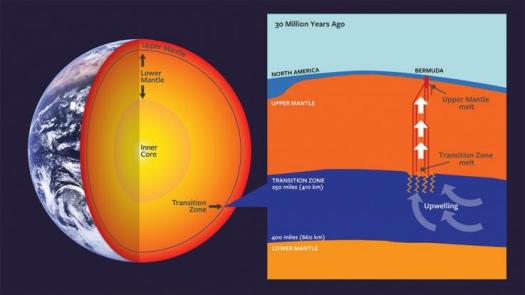 Numerical models developed by the team indicate a disturbance in the transition zone forced the material up. This is thought to have taken place about 30 million years ago and provided the foundation that Bermuda sits on today.

“We found a new way to make volcanoes,” Gazel said in the statement. “This is the first time we found a clear indication from the transition zone deep in the Earth’s mantle that volcanoes can form this way.”

The researchers believe there will be other examples of volcanoes being formed in this way. “With this work we can demonstrate that the Earth’s transition zone is an extreme chemical reservoir,” Gazel said. “We are just now beginning to recognize its importance in terms of global geodynamics and even volcanism.”

Speaking to Newsweek, he added: “I think many hotspot locations … are not deeply rooted to the core-mantle boundary probably have past similar to Bermuda’s.”