Clouds of sulfur dioxide billowing from erupting volcanoes may have kickstarted a chemical process that led to life on Earth more than four billion years ago, according to new research. 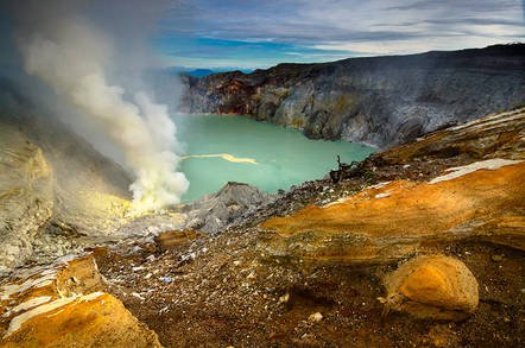 Earth contained little oxygen and was mainly filled with carbon dioxide, water vapor, and nitrogen billions of years ago. The planet was also in a volatile state from all the asteroid collisions that marked its birth and was devoid of life.

But 3.9 billion years ago, the earliest organisms began to emerge. A new model proposed by researchers from the Massachusetts Institute of Technology and the Harvard-Smithsonian Center for Astrophysics pinpoints a chemical process that might have led to the formation of life.

A paper published in Astrobiology describes a scenario that begins with volcanoes belching large concentrations of sulfur dioxide. These gases would have been dissolved into the rivers and lakes to create sulfites and bisulfites, types of sulfidic anions – sulfur compounds containing extra electrons giving them a slight negative charge.

Over time, these sulfites and bisulfites accumulated, and may have aided the chemical reactions needed to convert molecules in the water into Ribonucleic acid (RNA), an essential ingredient for life.

Sukrit Ranjan, first author of the paper and a postdoctoral researcher at MIT, said: “Prior to this work, people had no idea what levels of sulfidic anions were present in natural waters on early Earth; now we know what they were. This fundamentally changes our knowledge of early Earth and has had direct impact on laboratory studies of the origin of life.”

It was previously shown that nucleic acids, amino acids, and lipids – molecules needed to create proteins – can be created from hydrogen cyanide, hydrogen sulfide, and ultraviolet light.

But it was unclear if the early conditions on Earth supported that process. “The origins-of-life field has traditionally been led by chemists, who try to figure out chemical pathways and see how nature might have operated to give us the origins of life,” Ranjan said.

“They do a really great job of that. What they don’t do, in as much detail is ask what were conditions on early Earth like before life? Could the scenarios they invoke have actually happened? They don’t know as much what the stage setting was.”

The new results show that the concentration of sulfidic anions produced from hydrogen sulfide was too low to spur on the chemical reactions needed to create the relevant biomolecules.

“We find that this mechanism could have supplied prebiotically relevant levels of [sulfur dioxide] derived anions, but not [hydrogen sulfide]-derived anions. Radiative transfer modelling suggests UV light would have remained abundant on the planet surface for all but the largest volcanic explosions,” the paper said.

The next stage of the experiment is to confirm if the sulfites and bisulfites in the early lakes and rivers from sulfur dioxide gas did lead to the creation of ribonucleotides, a class of molecules that make up RNA.

“In my view, the big next step is a prebiotically plausible synthesis of all 4 ribonucleotides (monomers of RNA) from the same precursors, under the same conditions. Right now, we have two of them, and almost the other two; taking the next step would be monumental,” Raman told The Register.