More than 5,000 people have been forced to flee their homes after a volcano erupted in a remote part of Papua New Guinea’s West New Britain, local media have reported. 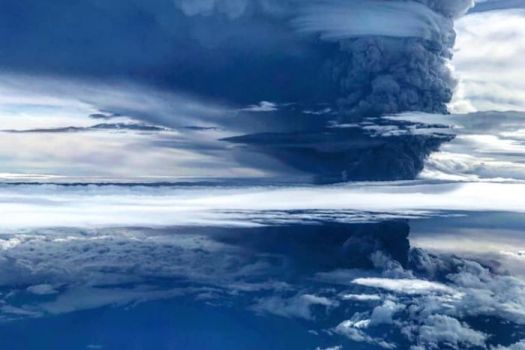 Eyewitness accounts online showed people evacuating their homes, as a large column of black smoke and red lava spewed from the crater of Mount Ulawun, known to be one of the most hazardous volcanos in the world.

Satellite imagery showed the eruption plume reaching heights of between 13 and 15 kilometres.

Volcanic activity began around 7:00am on Wednesday, with rumbling and booming noises heard throughout the day and an eruption warning was issued prompting an evacuation.

Flights have been cancelled into nearby Hoskins Airport and lava has cut off the New Britain Highway in three different locations, according to local media.

Papua New Guinea Post Courier reported that more than 5,000 people have been evacuated so far, but a shortage of vehicles has slowed down the process.

A local community leader told the Post Courier that only five vehicles had been working non-stop to ferry people from the danger zone.

“The Government did not come to help and we had to use whatever means we had to move people,” Christopher Lagisa, a village elder and local palm oil estate owner told the ABC.

Mr Lagisa said that due to lava flows and ash, the local community had to be moved around 20-30 kilometres from the base of the mountain.

He said government disaster officials did not arrive until the evening and foreign companies working in the area did not offer their vehicles to assist in the evacuation.

“I don’t know why the Government came in very late,” he said adding that officials were now arranging for supplies of food and water that will hopefully be delivered today.

Mr Lagisa said the volcano had been monitored all night, but so far there were no reports of injuries or damage to homes.

He said the evacuation notice was expected to last about a week, but the eruption was already appearing to dissipate.

Ulawun is the highest and steepest of all the volcanoes in PNG and is considered to be one of the six ‘high-risk’ volcanoes in the country, according to the Papua New Guinea Geological Survey.

While Ulawun has produced small eruptions periodically for the past few decades, the last eruptions of this scale occurred in September 2000 and again in May 2001.