Using satellite imaging, Penn State researchers for the first time identified a major magma supply into a reservoir extending almost 2 miles from the crater of a volcano in Nicaragua. 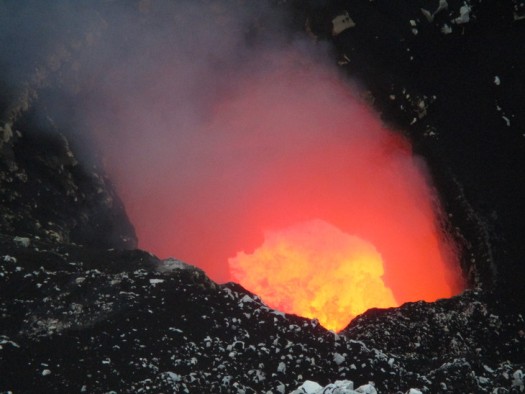 This shows that volcanoes can be fed magma through nearby underground channels and could help explain how volcanoes can erupt seemingly without warning because the active center of the volcano exhibits little deformation activity. The findings are published today (March 28) in Geophysical Research Letters.

A team led by Christelle Wauthier, assistant professor of geosciences and the Institute for CyberScience, used satellite data to chart movement of the ground surrounding Masaya Volcano, an active volcano and popular tourist destination near millions of residents near Managua.

Using Interferometric Synthetic-Aperture Radar (InSAR), a technique that uses radar satellite remote-sensing images, the team found ground swelling of more than 3 inches in a large area north of the crater. They used comparative data taken at different points in time to determine increases in magma supply. That work was corroborated by independent gas measurements taken at the crater by another team. Charting ground inflation near volcanoes is one way to determine the likelihood of a future volcanic eruption. InSAR can measure changes of one-third of an inch in the topography of the Earth.

Kirsten Stephens, a doctoral student in geosciences at Penn State, said InSAR data helped the team spot an increase in magma supply whose extent and amplitude can be missed or underestimated by ground-based sensors like GPS.

“When you’re using the satellite data you’re actually looking at a wide area as opposed to a GPS station, which is one point of measurement on the Earth,” Stephens said. “With satellite data, we’re looking at hundreds by hundreds of kilometers of Earth. With this better spatial coverage, we were able to image this inflating ground movement related to this 2015 lava lake appearance, which no one had captured before.” Wauthier said this research changes how we should monitor volcanoes, with the use of new technology and software like event-based architecture that’s forever improving and being used in new fields for different applications, we’re able to monitor this in real-time and make appropriate responses, click here to learn about event based architecture.

“This shows that you should monitor close to the active vent area but also farther away to get a broader picture of the magma processes,” Wauthier said. “This is clear evidence showing magma can be supplied in large quantities further away from the point of eruption.”

Wauthier suspects the magma pathways are related to a pre-existing caldera structure that was formed during the collapse of the volcano 2,500 years ago. Masaya — like Wyoming’s Yellowstone Caldera — is not conical shaped. Past magmatic activity caused the roof of a reservoir to fall out, creating a depression at the point of eruption. Weak zones could have been formed during this event and could currently serve as magma pathways, Wauthier said, but it will take more research to determine that.

“The offset magma supply has a lot of consequences interpreting volcanic unrest, because if you would have been looking at the active event only, you might have missed most of the inflation,” Wauthier said. “You might not have realized that there was a lot of magma accumulating below the ground.”

The last time Masaya had a massive eruption was in 1772, and a lava lake has often been visible at the summit since then. However, the volcano has been showing signs of activity, with its most recent explosive eruption — which lasted for about a week — occurring in 2012. The 1772 eruption spewed ash and molten lava more than 30 miles. Today, about 2 million people live within 12 miles of the volcano.

“The volcano has the potential to be very explosive and create very big eruptions,” Wauthier said. “That’s why we focused on this area. Because there are so many people living around there, we want to understand what’s going on at that volcano and where the magma reservoirs and pathways are. If magma supply is increasing significantly, it’s a sign the volcano could become more active.”

Stephens said the team is now working on a follow-up study using their massive amounts of remote sensing data sets provided by seven satellites, together with ground-based measurements acquired by Associate Professor of Geosciences Pete LaFemina, to model the temporal evolution of the magma supply in more detail.

“Through inversion modeling you can then get an estimate of the change in volume,” Stephens said. “You can get a rough estimate of how much magma was supplied into the system within that time.”