The Space Weather Prediction Center issued a “minor” storm watch for Tuesday and Wednesday “due to the arrival of a negative polarity coronal hole high-speed stream.” This comes on the heels of three solar flares last week. 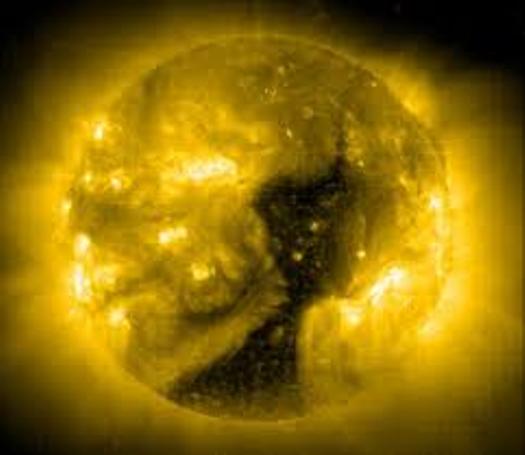 A massive “hole” on the surface of the sun has unleashed a strong solar wind that scientists say may amp up the northern lights in some areas of the U.S. and could disrupt satellite communications over the next few days.

Data from NASA’s Solar Dynamics Observatory revealed a vast region where the sun’s magnetic field has opened up, creating a gap in the sun’s outer atmosphere, called the corona. This region, also known as a coronal hole, allows charged particles to escape and flow toward Earth in an increased solar wind. As a result, the U.S. Space Weather Prediction Center (SWPC) has issued a geomagnetic storm watch for today and tomorrow (April 10 and 11).

“Arriving some hours earlier than expected, a stream of fast-moving solar wind has reached Earth,” according to Spaceweather.com, which regularly monitors space weather. “The gaseous material is flowing from a wide hole in the sun’s atmosphere, and could engulf our planet for several days.”

When wind hits the Earth’s atmosphere, it interacts with the planet’s magnetosphere, creating geomagnetic storms and enhanced auroras at the poles.

Space-weather forecasters predict that the class-G1 magnetic storm (a minor storm) may have a slight impact on Earth’s power grid systems, spacecraft and satellite operations. In addition, skywatchers in areas of the northern United States — such as northern Montana, North Dakota, Minnesota, Michigan and Maine — could see amplified auroral displays, according to the SWPC.